Now, I have a trick that I use to check pixel center alignment on graphics hardware, which is to render a series of micro-sized quads at varying offsets across a grid. A pixel will only light up when the sampling location at the pixel's center falls within one of these quads, and rendering a series of such quads with progressively nudged offsets across a grid thus produces a picture indicating the sampling locations. Here's what the output can look like: 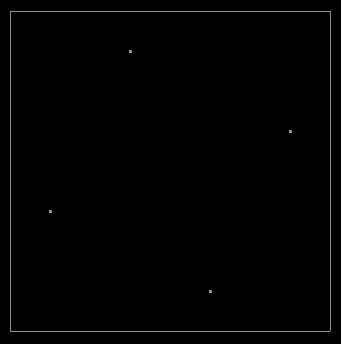 This was a trick originally I used to catch graphics drivers that were evilly set to force full-scene antialiasing on against the application's will, which made games look great but totally screwed over the image processing operations I was trying to do. (When you're trying to do a tricky sampling pattern and packing four monochrome results into an ARGB output, the last thing you want is the driver shifting your samples and slathering a big blur pass over the result.) The image above is catching one such driver in the act, which is doing 4xAA on what is supposed to be a regular one sample per pixel frame buffer. You can see the positioning of the four sub-samples which contribute to the antialiased result. It's also good for detecting deviations in sampling rules, however, which is how it applies here: 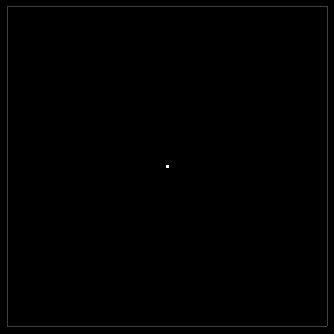 As it turns out, no drama here, just a bullseye in the middle of the pixel -- which means that 10level9 does correct for the pixel offset between D3D9 and D3D10. I checked the WARP and reference drivers too, just in case this was a bug or misfeature in the hardware driver, but they gave the same result.

The next question I had was how. I'm embarrassed to say that I spent far too much time in WinDbg trying to coax this out of the 10level9 driver using symbols and tracing when all I actually needed to do was examine the output of the shader compiler. You see, in order to use 10level9, you have to compile your shaders in a special mode like vs_4_0_level_9_1:

The shader compiler actually generates two versions of the vertex shader, one for Direct3D 9 class devices, and another for D3D10/11 capable ones. The telltale sign is the two lines in red, which compensate for the pixel offset. When compiling the shader for D3D9, the compiler reserves a special constant register for the offset and then emits additional logic to do the adjustment, like so:

Since the output position is in homogeneous coordinates, adding the offset scaled by w to the pre-divide position is equivalent to adding the offset to the post-divide position. This is apparently done at a higher level as the shader compiler is able to optimize this with the surrounding code: the multiply by w was omitted above because this was a 2D shader and the compiler noticed that w=1. In any case, the mystery of how the adjustment is done is solved -- not only is it done in the vertex shader, but the shader compiler modifies the shader so that 10level9 doesn't have to, and running into limits with the modified shader isn't a problem because the shader compiler can just enforce lower limits to allow for the adjustment. It also means you're taking the hit of an extra constant and an extra instruction for the adjustment, but for 2D stuff drawing big huge rectangles with four verts this is a non-issue.

tl;dr: 10level9 compensates for the different coordinate systems to make D3D9 hardware render with D3D10 rules and nice half-integer positioning, and all is good.